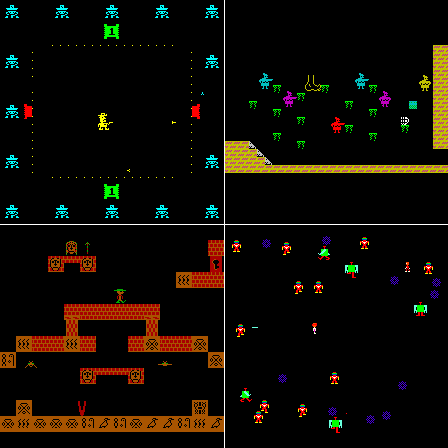 In an artistic era of pixel art that looks better than anything that was available in video game experiences for its first three decades, it might prove strange, if not questionable, that RetroShooti has gone back to the simplistic designs and visual abstractions of early arcade games, EGA-based DOS games, and microcomputer graphics. It’s a decision that we have reconsidered many times as designers, but it’s one that we are ultimately happy to have pursued.

It’s in our opinion as artists that the simplistic, doodle-like designs of early video game graphics are as valid an aesthetic as De Stijl, Superflat and Malevichian suprematism are in traditional art. More importantly, we think the simplistic look of RetroShooti benefits the player and their ability to react to the many strange entities and objects that exist in the world of ReSh, as our sprites are codified by color and behavior for quick visual reaction and gameplay control. 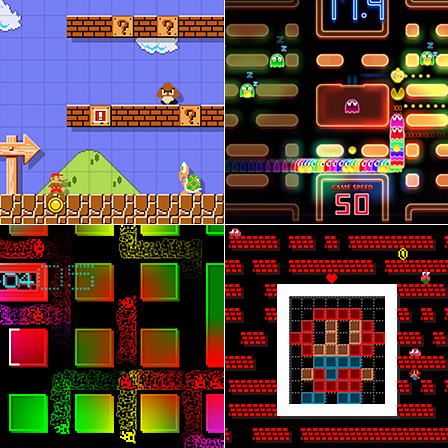 We have also taken influence from titles like Super Mario Maker, Pac-Man Championship Edition DX+, and the Mindware remakes of games like Heiankyo Alien and Space Mouse, to provide a kind of “enhanced experience” that has one foot in early graphics and one foot in modern aesthetics. For this purpose, our retro shaders for the game are not built on trying to replicate the look of any technology from the past, but rather to make the game as visually compelling as possible using modern techniques and technologies.

All in all, RetroShooti is not devoted to nostalgia, but to great design ideas. We didn’t go back just to be comfortably familiar to retro gamers, but to rediscover the past, as it’s only by recontextualizing those forgotten paradigms that these ideas can remain relevant today.